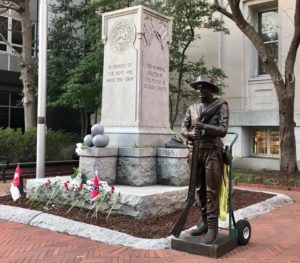 Well, after this last round of shenanigans in the last Durham County Commissioner’s meeting I can say with complete confidence that no matter what the majority of citizens of this county or city or any county or city think, as long as they have Marxist oriented, Socialist liberals in charge, law abiding, hard working, liberty, and freedom loving people have no say anymore.

Now the Confederate Monument in Downtown Durham is a “health risk”.  Try to put your head around that.  Anything to get what you want, aye Wendy?  We all know, those who have taken the time to do the research, know the majority of the citizens in this county and in North Carolina do not want these monuments moved.  However, we know where this is going.  The Durham County Commissioners and other liberal elected officials think they have the right to ride roughshod over anything that does not fit their one sided world view.
I will even go as far as to question whether the Mayor of Durham had the legal authority to close businesses in Durham during this pandemic.  That strikes at the heart of American liberty itself!  I just wonder how many people even asked this question.  If you didn’t then, you may be one of the sheep that follow the flock over the cliff.
We are on a slippery slope already.  If you give in to one groups every whim there is never an end to the demands.  This will not end with Confederate Monuments but the destruction of any monument that deals with anyone or thing that had to do with the building of the United States from our foundation.  It is free speech, freedom of choice, and the freedom to believe in what one wants to believe that is at stake.  Just watch.
William G. O’Quinn
Member,
Durham Committee on Confederate Monuments and Memorials

1 thought on “A Slippery Slope by William G. O’Quinn”