THE BOY SOLDIER at UNC-CHAPEL HILL 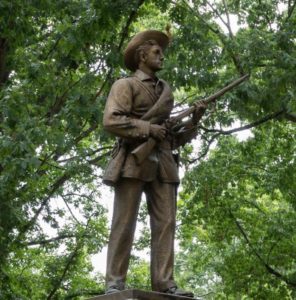 Silent Sam was dedicated on June 2, 1913.
There were 6 speakers for the event. One was Governor Locke Craig who stated,
“As one of the students of this University who left its halls to serve as a soldier of the Confederacy, following Lee to Appomattox, I appreciate most highly this monument erected in memory of my comrades both dead and living. May it forever remain as an object lesson to teach all future generations that duty is “the sublimest word in the English language” and that the sons of this University were willing to suffer and, if need be, sacrifice their lives in their devotion to duty. We thought then we were right, and now we know it.”

Bettie London, Chair of the Monument Committee, spoke of the intent and reason behind creating the memorial:
“As Chairman of the Monument Committee of the North Carolina Division of the United Daughters of the Confederacy I have the honor, and it gives me much pleasure, to present in their name to the trustees of the University of North Carolina this monument which is erected in memory of those students of this University who served in the armies of the Confederate States of America.
No man in any age or country more richly deserves to be commemmorated in bronze or stone than those youths who at the call of their respective states rushed to arms and suffered the indescribable hardships and dangers of a Confederate soldier’s life. While this monument is an outward expression of our love for them and our admiration of their heroism, yet also the loving hearts of the women of the South will ever be memorial tablets on which will be inscribed the memory of their virtues and valor.”

Julian Carr had been a student at UNC during the war and returned to school when the war ended. He later became a major industrialist, entrepreneur and philanthropist celebrated for generously donating land and money to various North Carolina colleges and universities including
Davidson, Wake Forest, St. Mary’s, Elon, and Greensboro among others. As a trustee of Trinity College, then located in Randolph County, he led a campaign to raise funds to move the school to Durham, where it afterward became Duke University. He was also a benefactor of the Training School for Colored People in Augusta, Ga., and American University in Washington, DC.
He contributed to orphanages and to homes for Confederate veterans and widows, as well as the Methodist Church.
His speech at the dedication included these poignant words:

John A. Wilson, the sculptor, had spelled out his intentions in a letter to one of the sponsors:
“The ideal commemorated by this monument is one of service and the noble answer to the call of duty. It is not intended as merely a monument to the dead but a lesson to the living.”

John Albert Wilson (1877–1954) was a Nova Scotian sculptor who produced public art throughout North America. He was a professor at the School of Architecture at Harvard University for 32 years and is most famous for his American Civil War monuments: the Confederacy Statue (Silent Sam) in North Carolina and the Washington Grays Monument (the ‘Pennsylvania Volunteer’) in Philadelphia.
In 1913, Wilson was commissioned by the North Carolina Chapter of the United Daughters of the Confederacy to make the Confederate Monument (Silent Sam) for the students of the University of North Carolina at Chapel Hill who served in the war. It was the first major work Wilson created in his new “Waban Studio.” At least 40 percent of the [UNC] students entered the service, which is a record not equaled by any other institution. Similar to his unarmed statue of Private Daniel Bean of Brownsville, Maine, Wilson created a “silent” statue by not including a cartridge box on the Confederate soldier belt so he cannot fire his gun. 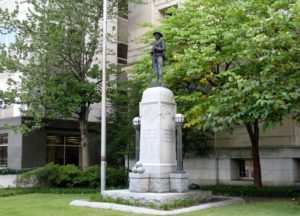 “The Boys Who Wore The Gray”

The Durham memorial was dedicated the morning of May 10th, 1924 (Confederate Memorial Day) The Durham Morning Herald issued a front page image of the Durham Memorial. Titled “Durham County’s Tribute”. The article read: “Saturday morning the people of Durham will dedicate its Confederate monument to the honor and glory of those men of this county who fought for the south during the Civil war. A large crowd expected to attend. The monument cost several thousand dollars and is a credit to the men for whom it was erected as well as to the community.” “Saturday Will Be Red Letter Day In Lives Of Old Soldiers Who Have Worked For Monument Many Years” It was a rainy day. Approximately 60 Confederate Veterans, and many sons and daughters attended the dedication. Read the Durham Morning Herald coverage of the event here: http://www.heraldsun.com/latest-news/article167615247.ece/BINARY/ConfederateMonumentDedicationDurhamMorningHerald.pdf