In Columbus, Georgia, as well as some other cities, the soldiers who died in the War Between the States were honored on April 26th, 1866. The Ladies’ Memorial Association of Columbus, Georgia, passed a resolution in January of 1866 to designate a day to place flowers on the graves of fallen soldiers. The group’s secretary, Mary Ann Williams, sent information about their plans to newspapers all over the United States. The letter asked people to honor the fallen on April 26th, the date that many Confederates surrendered in North Carolina in 1865.

The 12 April 1866 edition of The New York Times reported, “Preparations are being made at various points throughout the South to observe the 26th of April as an anniversary in honor of the rebel dead.”

So, while Columbus, Mississippi is often credited with being the birthplace of Memorial Day as they held the first event, the ladies of the town with the same name in Georgia actually conceptualized the observance.

On April 26th, 1866, people put flowers on graves of Confederate heroes across the South. The Southern women also decorated the final resting places of Union men, which garnered some publicity.

After being repeated in 1867, it became a federal holiday in 1868. In the spring of 1868, a committee organizing the decoration ceremony for Lafayette, Indiana, where there had been a prison during the war, received a wreath. This note was attached:

Will you please put this wreath upon some rebel soldier’s grave. My dear papa is buried at Andersonville, and perhaps some little girl will be kind enough to put a few flowers upon his grave.

Regardless of the location of the first Memorial Day, it was most certainly a concept born in the minds and hearts of Southern women. Women all across the Southland organized decoration days, and the women of the North soon followed. Southern women also set about raising funds and erecting memorials in their communities to honor the fallen Confederates who had no marked graves. Many had died in battle, and their remains had never been recovered. When we participate in Memorial Day events, we should bear this in mind and place wreaths and flowers upon Confederate memorials. The removal and/or destruction of our veterans’ memorials is the same as grave desecration.

The aim of the NC SCV Memorials Fund is to preserve and restore Confederate Memorials, plaques, and markers, as well as erect new ones. If your camp needs assistance with this or with purchasing land, contact the Memorials Fund Team. 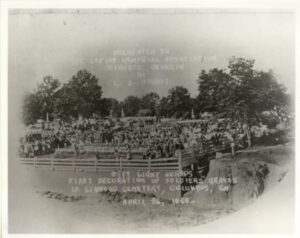 On this Memorial Day, please consider a donation to the NC SCV Memorials Fund to help us continue the legacy of the women of the South in 1866 by honoring the memory of our Confederate veterans.