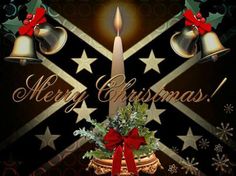 As this year comes to a close and we celebrate Christmas with our loved-ones, we, the Sons and Daughters of Dixie, can’t help but reflect upon the sadness and frustration 2020 has brought upon us. We’ve watched our memorials being toppled, defaced and removed. We’ve witnessed archives and artifacts set ablaze, school names and street names changed and a general attempt at purging anything even associated with the Confederacy. It’s been a year of rioting, violence and social upheaval. That coupled with the fear and financial devastation of a pandemic has made this a year we’d like to forget, but, won’t ever be able to. Nothing has seemed normal with church doors closed, schools on hiatus, shortages of goods on store shelves and everyone walking around with masks on.

Yet, we must remind ourselves of what our ancestors endured during Lincoln’s War. Not only was the holiday season difficult for the military men, but, it was hard on the families, as well. As the war waged on, things became more devastating for the people of The South. Northern families did not feel the sting of an impoverished economy nor live with the fear and pain of war being fought on their very doorstep. Christmas was altered in both the North and South, of course, as many husbands, sons, and fathers were away on the battlefield or had lost their lives.

Presents were fewer in The South for children. Many worried that Santa couldn’t get through Yankee blockades. This poem appeared in newspapers and magazines of the time: “Santa Claus” by Mary McCrimmon

“I am sorry to write, Our ports are blockaded, and Santa, tonight, Will hardly get down here; for if he should start, The Yankees would get him unless he was ‘smart,’ They beat all the men in creation to run, And if they could get him, they’d think it fine fun To put him in prison, and steal the nice toys He started to bring to our girls and boys. But try not to mind it–tell over your jokes– Be gay and be cheerful, like other good folks; For if you remember to be good and kind, Old Santa next Christmas will bear it in mind.”

Decorations and toys were homemade. Strings of popcorn and ruffled paper were used to adorn trees while rag dolls and wooden soldiers would be found in stockings on Christmas morning. Dinners could have included oysters, ham, turkey, venison, vegetables, breads and cakes near the beginning of the war. In the last years, Christmas meals would have been much leaner due to the Yankee foragers, burning and decimation of crops, and the general financial hardship that Southern families faced.

Even during war, soldiers celebrated Christmas in various ways. Things like hardtack was used to decorate trees and some reported singing carols and celebrating with a special meal or drinks such as coffee, whiskey or eggnog. But, as the war dragged on, deprivation replaced bounteous repasts for the military men and their families. Men who had been accustomed to cutting down the tree, providing the meat for the dinner and worshiping in church for Christmas were now scavenging for firewood and singing around a campfire during the holiday season. That is, if they weren’t involved in combat.

Let’s listen to some voices of the past:

In 1860, many worried about the civil unrest, fearful that Christmas would be the last before the outbreak of war. An Arkansas diarist writes: “Christmas has come around in the circle of time, but is not a day of rejoicing. Some of the usual ceremonies are going on, but there is gloom on the thoughts and countenances of all the better portion of our people.”

In 1861, Sallie Brock Putnam of Richmond, Va wrote:  “Never before had so sad a Christmas dawned upon us…we had neither the heart nor inclination to make the week merry with joyousness when such a sad calamity hovered over us.”

Ms. Cornelia McDonald of Va wrote in her journal in 1862, “Christmas is but ten days off, the blessed time that used to be so joyous. It shall have something bright and cheery in it for the children. They shall hang up their stockings, poor little things, even if I have to manufacture the things to put in them.”

One of the dreariest accounts came from Lt. Col. Frederic Cavada who was captured at Gettysburg. He wrote about Christmas 1863 in Libby Prison in Richmond: “The north wind comes reeling in fitful gushes through the iron bars, and jingles a sleighbell in the prisoner’s ear, and puffs in his pale face with a breath suggestively odorous of eggnog.” “Christmas Day! A day which was made for smiles, not sighs – for laughter, not tears – for the hearth, not prison.”

Confederate General Gordon, writing from his headquarters near Petersburg, wrote: “The one worn-out railroad running to the far South could not bring us half enough necessary supplies: and even if it could have transported Christmas boxes of good things, the people at home were too depleted to send them.” His wife, who was with him at headquarters, presented him with a most precious treat for Christmas 1864—coffee brought from home.

Also, during the holiday season of 1864, on December 22nd, General William Tecumseh Sherman sent this dispatch: “To His Excellency, President Lincoln: I beg to present you as a Christmas gift, the city of Savannah, with one hundred and fifty heavy guns and plenty of ammunition and also about twenty-five thousand bales of cotton.”

Now, let’s close the collection of quotes with these words of Johnny Green, of the 4th Kentucky’s Orphan Brigade: “Peace on Earth, Good will to men should prevail. We certainly would preserve the peace if they would go home and let us alone…”

The past few years culminating in the events of this year have made it perfectly clear that they don’t intend to ever “let us alone”. War rages on against our history, heritage and legacy. Let this Christmas renew within us a will and desire to boldly stand up against evil and destruction when we recall all our ancestors endured. Their stories must be kept alive and their memories must be honored! We can preserve our heritage by placing new memorials and maintaining existing ones. This is the mission of the NC SCV Memorials Fund. Your donation to support our efforts would be greatly appreciated.

Please accept our wishes for you and yours to have a Christmas filled with love and warmth. May God bless us all in the coming year!

(Sources: The Battle of Waynesboro by Richard G. Williams Jr. and Ersatz in the Confederacy by Mary Elizabeth Massey along with input from Teresa Roane, Michael Hardy, Lois Sprengnether Keel and Mary Hansel)